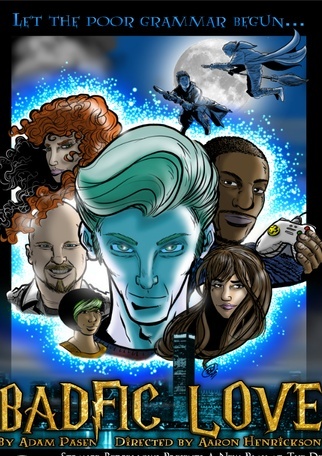 Strange Bedfellows Theatre, known for its integrated, experiential approach to producing theatre, proudly announces the Professional World Premiere of Badfic Love by Adam Pasen and directed by Aaron Henrickson. Badfic Love will be presented at The Den Theatre, 1333 N Milwaukee Ave. in Chicago, for 15 performances, April 3 – May 2, 2015. Tickets, priced at $20, are on sale at strangebedfellowstheatre.com.

By day Kyle is a lowly sales associate at Staples, but by night he is part of an elite organization that scours the internet to keep it safe from the writers of bad fanfiction. When he becomes obsessed with a Harry Potter badfic and falls for the group’s public enemy #1, his love life and the fate of the entire plot continuum are at stake. Meanwhile, inside the badfic, the characters formerly known as Harry and Draco race to understand who they are as their narrative goes increasingly off the rails. Part Pirandello and part Joss Whedon, Badfic Love asks the question: “what if the writer telling your story never disappeared, but is just really, really, REALLY terrible?”

In 2012 playwright Adam Pasen was awarded the WordBRIDGE Playwrights Laboratory Fellowship by the Kennedy Center to develop Badfic Love at Center Stage in Baltimore with dramaturgGeorge Brant (Grounded).  Badfic Love was also a finalist for the 2015 Steppenwolf Garage Rep, as well as a semifinalist for the Seven Devils Playwrights Conference and The Dionysos Cup Festival of New Plays.

The Strange Bedfellows are proud to have a number of talented partners for the Integration Projects on Badfic Love, bringing together musicians, visual artists and local businesses in creating an integrated environment surrounding the performance.

Badfic Love will be presented at The Den Theatre, 1333 N Milwaukee Ave. in Chicago, for 15 performances, April 3 – May 2, 2015. Performances will be held Thursdays thru Saturdays at7:30 pm. The Press Opening is scheduled for Monday, April 6 at 7:30 p.m.  Tickets, priced at $20, are now on sale at strangebedfellowstheatre.com or dime.io/events/badfic-love.

Strange Bedfellows Theatre is dedicated to finding unlikely companions to theatre and art, while focusing on engaging audiences in experiential storytelling. We seek to bring dynamic insight to the re-telling of familiar stories and characters through both existing and newly developed text. We collaborate with other artists in interactive, mixed media and mystically charged performances to augment the Chicago community. Strange Bedfellows Theatre earnestly works at inspiring audiences to discover beauty in the everyday strange.

ADAM PASEN (Playwright) is a North Shore-native and holds a PhD in Playwriting from Western Michigan University, as well as a MA and BA in Creative Writing from Northwestern and the University of Illinois at Urbana-Champaign, respectively. His plays include Tea with Edie and Fitz, Board Fold: a tale of retail, Badfic Love, Vanity Fair, “Spats,” and “Starf*cker,” and have been awarded a BroadwayWorld Award for Best New Work, a WordBRIDGE fellowship, and the KCACTF National Ten-Minute Play Award.  Pasen’s plays have also been produced or workshopped by Theatre Oxford, American Theater Company, Remy Bumppo, the Samuel French Off-Off Broadway Festival, and Tectonic Theater Project and have been published in Best American Short Plays from Applause Books and Best Women’s Stage Monologues and Scenes from Smith & Kraus.

CRISTIANA BARBATELLI (Michelle) has appeared in The Bully Show with AlphaBet Soup Productions (currently running), Wyrd Sisters with MorBacon Theatre Co. and Crimes of the Heartwith Oil Lamp Theatre. She is also a singer and a writer; more production info is available on cristianabarbatelli.com.

DAVID FLORA (Benny) is originally from Carlisle, KY and a resident of Chicago for the last ten years. A graduate of the Second City Conservatory, iO Chicago Training Center, Annoyance Training Center, and ComedySportz Chicago Training Center, he has directed, produced, and performed in numerous sketch and improv shows across the city. Recent theatrical credits include Fairlane Theatre’s Autobahn and CAN’s Industry Night. He also does a podcast about weird stuff called Blurry Photos. David holds a B.A. in Dramatic Arts and Music from Centre College, Danville, KY.

CHRIS FOWLER (Kyle) studied Journalism at Creighton University before moving to Chicago in 2012. Chris serves as the Social Media Manager for The New Colony where he will appear in their production of The Terrible at The Den Theater this fall.

KATIE HUNTER (Cynthia) is originally from Kansas City and has had the pleasure of performing regionally at The New Theatre, American Heartland, Starlight, and The Coterie. Favorite Chicago credits include Sarah in The Terrible Magic of Gertie Lazarus (New Colony), Janet Van De Graaf in The Drowsy Chaperone (University of Chicago), and The Andrews Sisters (Theo Ubique). Katie is a UChicago grad and a proud member of the 25th generation of Off Off Campus.

JOVAN KING (Jared) hails from Yellow Springs, Ohio and received his BFA in Acting from Wright State University.  He has been acting in the Chicago theatre scene for five years now and has appeared in such plays as Bard Fiction and Klingon Christmas Carol with Comedia Beaurgard, Macbeth with Polarity, and My First Time with Broken Nose.  This is his first time working with Strange Bedfellows.

CONNOR KONZ (Harry) is a native Texan and received his BFA from the University of Oklahoma in Performance and Dramaturgy. Recent productions credits include: Dancing in the Storm (Adapt Theatre Productions), Mercury is Perpetually in Retrograde (Williamstown Theatre Festival), and The Cherry Orchard (University of Oklahoma).

STEPHANIE SHUM (Dale) has appeared in Circle-Machine (Oracle Productions), reWILDing Genius (The New Colony/Steppenwolf Garage Rep 2014), Kate and Sam Are Not Breaking Up(The New Colony), Alice (Nothing Without a Company), Mnemonic (Red Tape Theatre), The Hundred Flowers Project u/s (Silk Road Rising), and Equivocation u/s (Victory Gardens). She is an Ensemble Member and the Managing Director of The New Colony and a Company Member with Nothing Without a Company where she will next appear in Punk Punk this summer.

JAKE SZCZEPANIAK (Draco) was last seen in Red Tape Theatre’s Mnemonic downtown. He was also a part of the long running Midwest premier of Cock at Profiles Theatre. Jake has also proudly worked with Shattered Globe Theatre (Burn This), Remy Bumppo (Changes of Heart), Pavement Group, Pride Films and Plays, Theater Seven of Chicago, (Re)Discover Theatre, Circle Theatre, and Project 891. Jake is a graduate of U of I Champaign-Urbana’s Acting program.