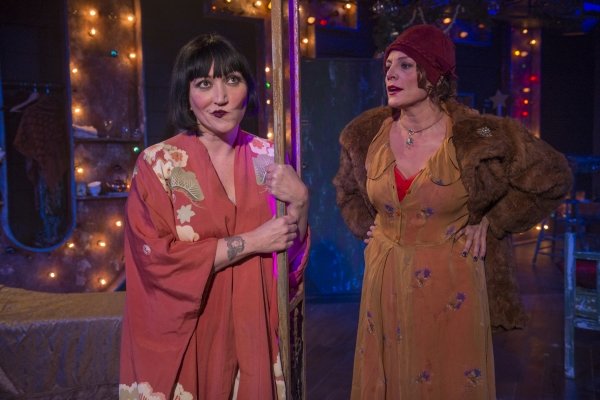 We might presume that each of us are capable of getting back up every time life kicks us to the ground, but A Red Orchid Theatre’s sharp take on Tennessee Williams The Mutilated shows us the harsh realities of a cold, thoughtless world. The play features two fragile women, who, amidst a world of dangerous riffraff, drunks and frisky sailors cling to the hope they too will have their happy ending.

Trinket Dugan (Mierka Girten) has money and a terrible secret that only she and her no good, alcoholic friend Celeste (Jennifer Engstrom) know. When she’s not shoplifting or chugging all of Trinket’s booze, Celeste tries to make ends meet as a prostitute. Recently bailed out of jail by her brother Henry (Doug Vickers), he demands that Celeste change her name because he can no longer stand by as she brings shame upon the family with her repulsive antics.

Trinket and Celeste base their tumultuous relationship on need. Both live on the fringe, and it’s their need for love, connection and friendship that binds them. Much of the action takes place on the same French Quarter in New Orleans that Williams once walked, where “the strange, the crazed, the queer” get into the holiday spirit by singing Christmas carols penned by the playwright.

Holed up at a lousy hotel on Christmas Eve, Trinket swigs cheap wine and contemplates seeking out a male companion, even with her shameful secret – she had one breast removed. Although this deeply depresses Trinket, it is Celeste desperate, hungry, and rejected – who is far off worse with her spiritual deformity. The hotel’s switchboard operator, Bernie (Lance Baker) is the gatekeeper and the one who stands between Celeste and her meal ticket friend. The ensemble, playing brassy old and original tunes, captured the essence of the Quarter’s atmosphere on the wonderfully detailed and ornate set by Grant Sabin. Costumes by Karen Kawa oozed originality, and the lighting by Mike Durst set the tone and mood beautifully throughout the performance.

I highly recommend this dark, smartly conceived comedy directed by Dado with musical direction and original music by Brando Triantafillou.