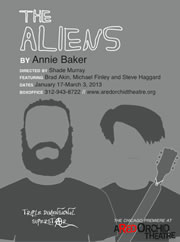 A Red Orchid Theatre announces new performance dates for its hit Chicago Premiere production of Annie Baker’s The Aliens, directed by Shade Murray.  Due to high ticket demand, the production is now extended through Saturday, March 16, 2013 at A Red Orchid Theatre, 1531 N. Wells. Tickets for the two-week extension are now on sale through the box office, (312) 943-8722 and www.aredorchidtheatre.org.

All day every day, two slackers hang out behind a coffee shop by the dumpsters.  These guys have elevated loitering to an almost Buddhist “tea ceremony” level, where music, Bukowski, sex, travel, philosophy, friendship, and ambition – or lack thereof – are intensely meditated upon while the busy world rushes by.  Enter a 17 year-old barista-cum-disciple, and so begins a summer where no one moves but everything changes.

Since 1993 A Red Orchid Theatre has been an artistic mainstay of the Chicago theatre community; known and praised for its powerful ensemble, creative design and