A RED ORCHID THEATRE PRESENTS THE CHICAGO PREMIERE OF ACCIDENTALLY LIKE A MARTYR; JAN 15 – MARCH 1, 2015 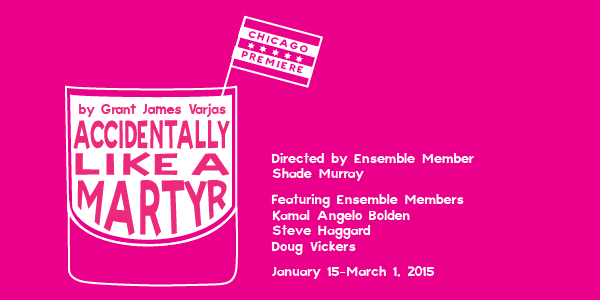 In a dive-y gay bar on Manhattan’s lower east side the regulars and the restless others do battle, joke and drink their way through a lonely winter evening.  Different generations and backgrounds collide, secrets are revealed and old wounds are torn anew as these survivors come to grips with life, loss and aging in the 21st century.  Family and friendship are the focus of this humor filled drama in the tradition of The Time of Your Life and Small Craft Warnings.

A Red Orchid Theatre has served as an artistic focal point in the heart of the Old Town community of Chicago since 1993.  Chicago Magazine named Red Orchid Chicago’s Best Theatre Company of 2010. Over the past 22 years, its Resident Ensemble has welcomed into its fold an impressive array of award winning actors, playwrights and theatre artists with the firm belief that live theatre is the greatest sustenance for the human spirit. A Red Orchid is well known for its highly-acclaimed experimental and cutting edge productions. In addition to its professional season, the company also maintains an exciting youth programming wing.