A Red Orchid Theatre Presents Chicago Premiere of IN A GARDEN, April 4- May 19 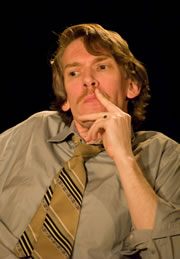 What is the use of beauty?  In 1989 an ambitious American architect is summoned to the fictitious Middle Eastern country of Aquaat where the Minister of Culture commissions him to build a thing of beauty; something to remind him of his happiest childhood memories. Architectural plans get sidelined as interest shifts to debates of politics, personal life and pop culture.  One begins to wonder who is actually in charge and if beauty is even possible.

“Howard Korder, and his play Boy’s Life have always seemed something of legendary theatre history to me and I am thrilled to be forging this new relationship with him through the Chicago Premiere of In a Garden,” says Artistic Director Kristen Fitzgerald.  “Each time I have come back to the script I find something new; beauty, control (or lack of), history, ambition, things touched by humans, and the fact that no matter how hard we try nothing ever turns out exactly as intended.  I am so grateful to have Lou Contey in the room to focus and bring it all to life for our 20th Anniversary season.”

Howard Korder (Playwright) is an American screenwriter and playwright. He is the author of the 1988 coming-of-age play Boy’s Life, which earned him a Pulitzer Prize for Drama nomination. His play Search and Destroy was adapted into a film in 1995. Among the screenplays he has written are The Passion of Ayn Rand and Lakeview Terrace. He is also one of the writers of “Boardwalk Empire.”

Lou Contey (Director) received a Non-Equity Jeff Award for Outstanding Direction for Awake and Sing! and a Non-Equity Jeff Award nomination for It’s All True, both at TimeLine. Other TimeLine productions include the Chicago Premiere of Frost/Nixon, Trumbo, Paradise Lost, Lillian, The General From America, Copenhagen and Pravda.  He has directed more than 60 plays, among them Requiem for a Heavyweight, A View From The Bridge, A Streetcar Named Desire, All My Sons, Rocket to the Moon, Who’s Afraid of Virginia Woolf?, Judgement at Nuremberg, Meet Joe Doe, Boys Next Door and Marriage Play. He is a 12-time Jeff nominee and has received seven Jeff Citations. He has worked at Goodman Theatre, Steppenwolf Theatre, Theatre at the Center, Buffalo Theatre Ensemble, Shattered Globe Theatre, Provision Theater, Eclipse Theatre and American Theater Company, among others. He received his MFA in directing from The Theatre School at DePaul University, where he is currently an adjunct instructor.

Larry Grimm (Hacket) is a founding ensemble member of A Red Orchid Theater and has appeared inMegacosm, Born Guilty, Caine Mutiny Court-Martial, The Physicists, In the Solitude of Cotton Fields, Mr. Kolpert, The Meek, Pumpgirl and Abigail’s Party. He directed AROT’s Youth Ensemble in a number of small productions at the theater itself and in guest appearances with Collaboraction and Theater Seven. Other Chicago credits include Steppenwolf (A Fair Country, Wolf Lullaby, I Never Sang for My Father), Victory Gardens (In The Next Room or The Vibrator Play), Next Theatre (Maple and Vine), Raven Theatre (Death of a Salesman, The Glass Menagerie – Jeff Citation for Supporting Actor), Famous Door, Collaboraction, New Crime, and Piven Theater Workshop. Larry teaches young actors at Chi- Arts, Chicago’s first public high school for the arts, and is a teaching artist and professional development leader for Steppenwolf for Young Adults.

Rom Barkhordar (Othman) appears at A Red Orchid for the first time.  He was most recently seen inNight Over Erzinga at Silk Road Rising.  Rom has also performed with Kansas City Rep, Griffin Theatre, Steep Theatre The Goodman, Lifeline, Lookingglass, Timeline, Vitalist, Eclipse and Steppenwolf among others.

Shannon Parr (Prudhomme) makes his A Red Orchid debut with In a Garden.  After serving in the first Gulf War, Shannon returned home to attend college at Southern Illinois University where a single acting class was all it took to uncover his passion for acting.  He has since studied with with Dan LaMorte and Mary Ann Thebus and been seen onstage with Oak Park Festival Theatre, Provision, Factory, Rivendell, Mabou Mines in NYC and the NY Fringe Fest among others.  Film work includes The Liar, Fortunes,Mercury Rinsing, Chi-Girl and Going All the Way with Ben Affleck, Jeremy Davies, Rachel Weisz and Nick Offerman.

Emilio Robles (Najid) makes his A Red Orchid debut with In a Garden.  Born and raised in Fort Wayne Indiana, Emilio is an actor, director, voiceover and teaching artist in Chicago.  He has appeared on stage with Congo Square, Stage Left and Teatro Vista among others.  Emilio is currently working with the A Red Orchid Youth Ensemble on a devised show, opening April 27.  He is a resident Teaching Artist at Steppenwolf Theatre as well as the Head Pedogogical Consultant for Steppenwolf Young Adults; developing curriculum, enriching teaching practices and mentoring fellow teaching artists.

Since 1993 A Red Orchid Theatre has been an artistic mainstay of the Chicago theatre community; known and praised for its powerful ensemble, creative design and its gripping, intimate productions.  The resident Ensemble maintains the conviction that passionately committed theatre will draw passionately committed audiences, and the 2012-2013 subscription season promises to bring Ensemble and audience even closer together.

*Students are always 2-for-1 on Thursdays