Some may see Charles Dickens’ A Christmas Carol as a heartwarming tale about forgiveness and starting over again.  Then there may be others who see it as just a good, old-fashioned ghost story about a miserly old fool visited during the night by a trio of ghosts representing Christmases past, present and future who teach him a thing or two about his life, and what he needs to change.  For the Milwaukee Repertory Theater, which has been staging A Christmas Carol in the city’s historic Pabst Theater every year now since 1976, Dickens’ classic yuletide tale represents an opportunity to give devoted Milwaukee theatergoers an enchanting gift filled with many memorable moments that will warm the heart with good cheer throughout the holiday season.

And this year, I’m happy to report, The Rep has risen to the challenge once again, and in a most spectacular way. 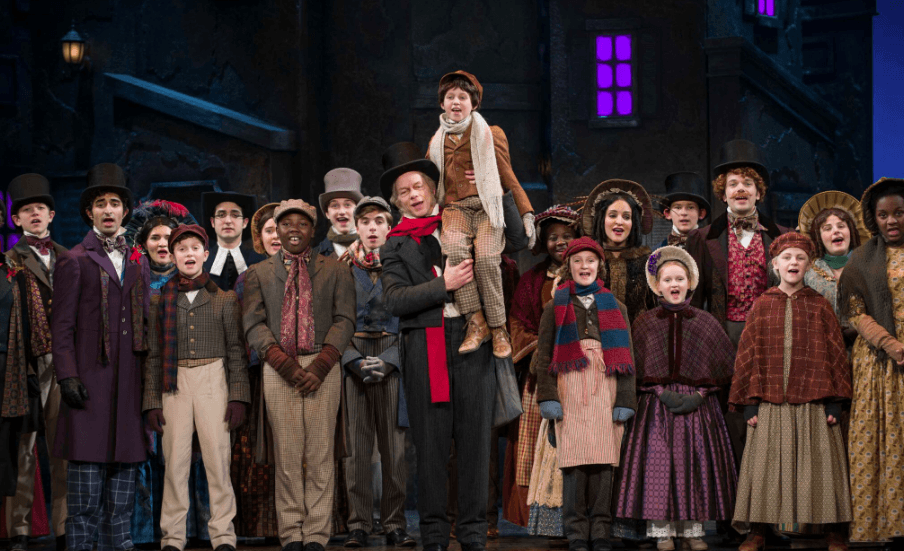 Left to Right: Jonathan Wainwright and Ashley Bock with the company of A Christmas Carol. Photo by Michael Brosilow

The Rep, under the guidance of artistic director and A Christmas Carol’s original adaptor, Mark Clements, and director Leda Hoffmann, has spared no details in taking a work that first debuted in 1843 and has undergone several retellings on film and television, to stage a Carol that is truly in a class by itself.  Colorful costumes, festive production numbers overflowing with lovely music and lively dancing, imaginative, revolving sets, exquisite lighting and sound and amazing special effects come together superbly in a delightful, lavish telling that’s both entertaining and touching.

It’s important to note here that this Carol does not lose the lessons of the original story amid the stunning production values given to it by The Rep.  Modern-day trimmings brilliantly highlight the sad-but-later triumphant story of the miserly Ebenezer Scrooge.  In this version of Carol, we visit Ebenezer as a young boy who we learn is trying to be perfect in order to please a father he fears.  We are not made to despise Scrooge, but to understand him and how he became a bitter, lonely man.  When, as a grown man pouring over his company’s books, Scrooge says, “Another year older, not a penny richer,” we can identify with his revelation.  And, after Scrooge is visited by the Ghost of Christmas Future and realizes he must change his ways, we are right there, beside him, cheering him on as if he were us.

A good deal of the credit for this more humanized, more real Ebenezer Scrooge goes to Jonathan Wainwright, who is reprising his role in this year’s version of A Christmas Carol.  Wainwright gives a masterful performance, creating a Scrooge who grows in front of our very eyes, and is able to elicit both humor and powerful emotions from his audience.  Wainwright heads a superb cast that includes Deborah Staples, who is both delightfully stylish and devilish as the Ghost of Christmas Past, and Eliel Pozos Lopez, who makes his stage debut in a touching performance as Tiny Tim.

One case member has ties to the Land of Lincoln: Christopher Peltier, who portrays the young Ebenezer Scrooge, performed in Twelfth Night at the Illinois Shakespeare Festival.

The cast consists of actors of different skin colors and nationalities.  The Milwaukee Repertory Theater deserves a round of applause for its ongoing commitment to diversity and for again producing A Christmas Carol that reflects that mission.