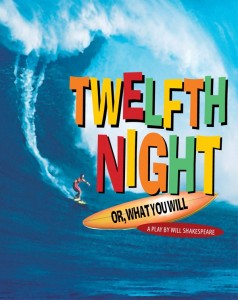 When the Twist, the Pony and the Watusi replace the galliard and gavotte, and ruffs and farthingales give way to Aloha shirts and bikinis, one may well ask with Viola “What country, friend, is this?”  It is indeed Illyria, Lady but you fetched up in a groovy 1960's beach blanket bingo-ing incarnation.

Directed by Lavina Jadhwani, featuring Festival Theatre Artistic Director Jack Hickey* as the irrepressible Sir Toby Belch and Will Clinger* as Malvolio, the ultimate “drag” (many also will recognize Clinger from his longtime hosting gig on WTTW's Wild Chicago), and stage managed by Katrina Hermann*, Twelfth Night previews Thursday, July 18 and Friday, July 19 at 8 PM in Austin Gardens (Forest and Lake) in Oak Park. The beach-buff, super cool production opens Saturday, July 20 (44th anniversary of the moon landing) at 8 PM and runs Thursdays, Fridays and Saturdays at 8 PM and Sundays at 7PM until August 24.

Of the updated setting, Jadhwani (Artistic Director of Silk Road Theatre) says: “Just like the Court of Orsino, the early 60's Beach party movies chronicled the tension between the 'Clean Teens' Insiders  to the 'Greasers' or 'square' Outsiders and the desperation of those who didn't fit in. The 60's Beach movies with their bouncy, youthful music told a world only just hearing the rumblings of the sexual revolution, civil rights, war protest that nothing would change and that everything was still going to be okay. The movies created a mythical world where everyone would, after all the plots and ploys, still be safe. As for sex, it is, as the phrase then put it, 'NATO, No Action Talk Only'. It's a young play and I believe the 60's celebration of youth will prove a perfect and pleasing setting.”

“If music be the food of love, play on”, sighs the lovelorn Count Orsino in Twelfth Night: or What You Will which follows Festival Theatre's Jeff Recommended brilliant and brooding staging ofAmadeus, a darker celebration of music. In this final production of Festival Theatre's critically acclaimed 2013 season, Shakespeare's original lyrics are set to a Beach Boys backbeat by composer Joshua Dumas and will be sung by the company accompanied by actors on guitar, ukulele, drums, trumpet, and tambourine.

Four hundred years on, the poetry as well as the problems are as fresh and complex as ever. “Present mirth hath present laughter/What's to come is still unsure.” Jadhwani says of this production: “Truth in comedy is one of the hallmarks of both Shakespeare's creations and Chicago theatre. The truth of this comedy deals not just with happy endings but the confusion and chaos before all is put right. Along with the high wit and silliness, there is great loss, fear of the future and the ordeal of not fitting into clear cut class distinctions.”

Twelfth Night previews on July 18 and 19, and opens onSaturday, July 20, running through August 24 in the park at Austin Gardens, 167 Forest Avenue in Oak Park, IL. Performances areThursday through Saturday at 8:00 p.m.andSunday at 7:00 p.m.as well as Wednesday, August 21 at 8:00 p.m.

Ticket prices are $25 for adults, $20 seniors (60 and over) and $15 for students with ID.  Tickets also may be purchased by calling the box office at708-445-4440, by e-mailing[email protected], or going online to OakParkFestival.com. Group rates are available.

Oak Park Festival Theatre – Oak Park's only Equity theatre and the Midwest's oldest professional theatre performing the classics outdoors – is currently celebrating its 39th year of theatrical excellence and is embarking on its third year-round season producing outstanding productions of the plays of William Shakespeare and other classical authors, as well as important contemporary plays by some of the world's greatest playwrights.

* Denotes membership in the Actors Equity Association – The Union of Professional Actors and Stage Managers.