Milwaukee Repertory Theater launches the Stiemke Studio’s season with the brilliant new play The Royale.  Heralded as “a gripping, vivid coup de theatre” by Variety, The Royale stars David St. Louis (Broadway’sSideshow, Porgy and Bess) as Jay “The Sport” Jackson who wants nothing more than to prove he’s the best boxer in the world but in the Jim Crow era, his chances are as good as knocked out. When a crooked boxing promoter hatches a plan for “the fight of the century,” The Sport just might land a place in the ring with the reigning white heavyweight champion. Set in a boxing ring and inspired by the true story of the boxer who broke the color barrier in professional sports, The Royale packs a punch that will leave audiences breathless. 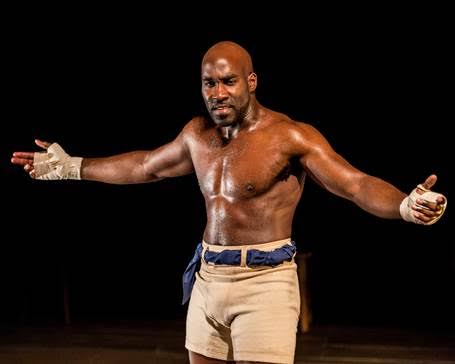 The Royale stars David St. Louis (Broadway’s Side Show) reprising his role of Jay “The Sport” Jackson from Center Theater Group’s world premiere of the play in 2013.  Joining him are Xavier Scott Evans (Signature Theatre’s The Mystery of Love & Sex) as Fish,John Gregorio (Mary Zimmerman’s Treasure Island) as Max, Sade’ E. Moore(Cornerstone Theater Company’s Demeter in the City) as Nina, and Cedric Turner(Same Train) as Wynton.

The Royale begins performances September 30 and runs through November 6 in the Stiemke Studio.  Tickets can be purchased online at www.MilwaukeeRep.com, by phone 414-224-9490 or in person at the Ticket Office (108 E. Wells Street).

Executive Producers for the production are Jackie Herd-Barber and Michael Barber.  The Stiemke Studio season is sponsored by Ed Seaberg and Patrick Smith.  The Rep is sponsored in part by The United Performing Arts Fund.

Rep-in-Depth: a pre-show conversation with Sade’ E. Moore, who plays Nina.  Rep-in-Depth occurs approximately 45 minutes before curtain for every performance of The Royale.

TalkBacks: a discussion with members of the cast and artistic team following the 8:00pmperformance on the following Wednesdays: October 5, October 12, October 19, October 26, and November 2.

Special TalkBack: join Special Guest Pete Ehrmann, staff writer for OnMilwaukee and expert on the history of black boxing in Milwaukee, as he discusses the important of boxing during the Civil Rights Movement in Milwaukee on October 7.

Community Conversation Panel Discussion: The March on Milwaukee
Heralded as The Selma of the North, Milwaukee played an integral part in the Civil Rights Movement.   Join Moderator Everett L. Marshburn, producer of MPTV’s Black Nouveau and Freedom Walkers of Milwaukee as he discusses this landmark event with participants in the1965-68 March on Milwaukee following the Saturday, October 15, 4pmshow.

For more information on these events and to see a list of panelists for our Community Conversations, please visit: http://www.milwaukeerep.com/On-Stage/Events/

Audio-Described Performance: Thursday, October 13, 7:30pm – the show will be described for patrons who are blind or have low vision.

American Sign Language Interpreted Performance: Thursday, October 20, 7:30pm – the show will be signed for patrons who are deaf or have low hearing.

Student Discounts: Students 18 and under can purchase $20 tickets for select seating areas.

Milwaukee Rep is a nationally-recognized company that presents compelling dramas, powerful classics, award-winning contemporary works and full-scale musicals housed in its three unique performance venues – the Quadracci Powerhouse, Stiemke Studio and Stackner Cabaret. The Rep also produces an annual production of A Christmas Carol, featuring a World Premiere of a new adaptation in 2016, at the historic Pabst Theater.  Under the leadership of Artistic Director Mark Clements and Managing Director Chad Bauman, Milwaukee Repertory Theater ignites positive change in the cultural, social, and economic vitality of its community by creating world-class theater experiences that entertain, provoke, and inspire meaningful dialogue among an audience representative of Milwaukee’s rich diversity.