In a very recent review of another biblical musical, I remarked on the fine line that must be walked in respecting the source material but allowing it to be accessible to believers and non-believers alike.   Since its inception in the early 1970’s, Jesus Christ Superstar has been looked upon as the quintessential rock opera; and for good reason.   As a concept album, this Andrew Lloyd Webber/Tim Rice juggernaut attached itself, quite unintentionally, to the Jesus movement of the early 1970’s and spoke to a generation of lost rebellious souls protesting the Vietnam War.  The title song “Jesus Christ Superstar” became a number one hit in England and the States and the “brown album”, as it came to be known, with Murray Head as Judas, Deep Purple’s Ian Gillian as Jesus and Yvonne Elliman as Mary Magdaline can still be found in most people’s rock collection.

In London, the stage version was an instant and long running hit.  Superstar did not fair too well in the United States, thanks mostly in part to a very bizarre Broadway staging by Tom O’Horgan.  However, this version did launch the career of Ben Vereen as well as Ted Neeley (who was in the chorus of the Broadway version but was asked to lead the cast in Los Angeles as well as the Norman Jewison hit film).    Numerous revivals have been mounted, including a recent Broadway stint, which was manifested from the acclaimed Stratford Festival production. 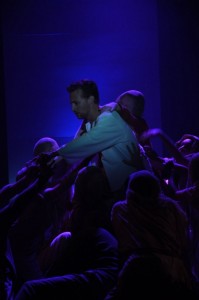 What makes Superstar work, when it is allowed to work, is to let the story tell itself and not force it.   Webber and Rice have made a point to tell the Passion from Judas’ viewpoint, which then makes him the protagonist (and antagonist).   Because of this vantage, the character development in an otherwise known story gets to be a richly layered tapestry of human emotion.

Big Noise Theater’s new production, helmed by Stacey Flaster succeeds on every level.   Ms. Flaster allows Superstar to be character driven and every performance she elicits from the phenomenal cast is powerful.   Roy Brown may look young (and a lot like Billie Joe Armstrong from Green Day), but he gives a vocally dominant performance and mature interpretation of Iscariot whose motives are nothing more than trying to save his best friend from a not so cool end.    What the recent Strafford production focused on, and what is salient in Ms. Flaster’s production as well, is the love triangle between Jesus, Mary and Judas.  Though not sexual  (the Stratford production was a bit more homo-inciting), the relationship between Mary and Jesus seem to be the final straw that sends Judas to turn his brother in.   Yes, this is the ultimate bro-mance.   As Mr. Brown cries “when He’s cold and dead, will He let me be; Does He love me to? Does He care for me?”, this doomed relationship is cemented in a passion only two best friends can understand.

As Mary Magdalene, Lauren Paris is soulfull.  Each of her numbers (and she the best numbers in the show) give her character a fantastic development arch.  In Everything’s Alright, we see her start to fall for Jesus and defend him; she then questions herself for why this is happening and the consequences of her emotional actions in I Don’t Know How To Love Him;  finally, she becomes a woman changed for the better, but at the ultimate cost in “Could We Start Again Please”.   By the time she walks past the crucified Jesus, there is not a dry eye in the house.

As good as all the performances are, it is Jonathan Lee Cunningham’s Jesus that rockets this production to the stratosphere.   Cunningham paces his portrayal exquisitely, with always a sense of mystery to his interactions with the apostles.   Vocally, Mr. Cunningham is on par, if not better than any person who has played the role on stage, or to record it, for that matter.

By their very nature, rock operas (or any sung through musical), are a tricky animal.

Every aspect from movement, vocals, acting, set, and lighting has to move symbiotically to make the production work.   As Ms. Flaster has also created the choreography, the scenes move seamlessly from one to another.   Robert Deason’s musical direction also mirrors Ms. Flaster’s take on the show; allowing each moment to build on top of each other while advancing the character story first and allowing the music to flow out of the emotion.

Big Noise, being a community theater, is comprised of actors of varying degrees of skill and acumen.  Here we have equity and non-equity actors each giving their all and that deservers acknowledgement.  Tommy Bullington is a dutiful King Herod; Ken Rubinstein is a menacing Caiaphas; Saja Blevins gets some female chops around the male soprano role of Annas; Nick Bailey’s Peter is vocally stunning (I would like to hear him sing the role of Judas as well); and Mike Weaver is a compassionate Pilate.

For those who haven’t experienced Jesus Christ Superstar this is the perfect production to be introduced.  For those who have seen it and participated in other productions, Ms. Flaster’s take on the tale is one of great relevance and importance that most other incarnations have missed.   Superstar aims to expose the downfall of stardom, as coined by Andy Warhol.   The more fame a celebrity obtains, the harder the public likes to see them fall.   The public also likes a good celebrity come back story and to see their fallen stars rise up again.   Jesus Christ Superstar has risen.