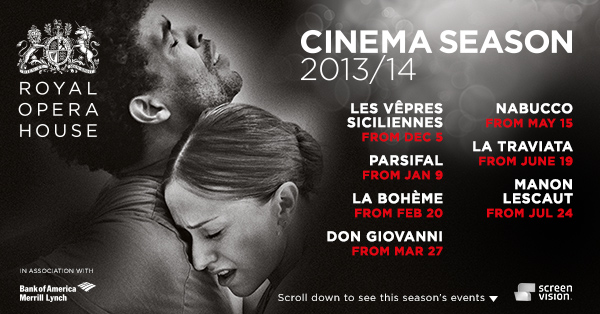 DESCRIPTION: A new production of Parsifal, Wagner’s huge, profound meditation on guilt, death and possible redemption. This one, directed by Stephen Langridge, designed by Alison Chitty and conducted by Antonio Pappano, the creative team who brought Birtwistle’s brutal, beautiful Minotaur to the stage. An extraordinary cast of Wagnerian singers come together: Heldentenor Simon O’Neill, recently acclaimed for his Siegmund, sings Parsifal; the magnificent bass René Pape is Gurnemanz; Gerald Finley makes his role debut as Amfortas after a wonderful Hans Sachs at Glyndebourne, Willard White sings the sorcerer Klingsor, and versatile singer-actress Angela Denoke is an intriguing choice for Kundry.

DESCRIPTION: Teeming with period detail, John Copley’s definitive production of this much-loved opera is traditional opera at its best. From a shabby garret to the bustling Café Momus to a snowy courtyard at dawn, this minutely observed panorama of 1830s Parisian life, beautifully designed by Julia Trevelyan Oman, conjures emotions and atmosphere ranging from joy to tragedy, in large-scale crowd scenes and intimate tableaux.  Puccini no doubt drew on his own student escapades – which anticipated his later reputation as a legendary bon viveur – for the robust humour of the comic scenes. And in his depiction of the tender and ultimately tragic love between Mimì (Maija Kovalevska, Carmen in 3D, 2010) and Rodolfo (Rolando Villazón, Rodolfo in Robert Dornhelm’s film version of the opera, the title role in The Royal Opera’s Don Carlo), Puccini achieved an immediacy, warmth and humanity that have rarely been equalled.

DESCRIPTION: Mozart’s sublime tragic comedy offers boundless scope for directors, and Kasper Holten has chosen it to follow his directorial debut of Eugene Onegin. He wants to shift the emphasis from Don Giovanni’s sex life into a darker place, showing Giovanni’s womanizing as an attempt to stave off his own mortality. Each woman he seduces represents a life he could have had. Though it is a dark piece, Holten intends to handle it with a light touch and he is working with a superb cast – Mariusz Kwiecien, one of the world’s leading Don Giovannis, Alex Esposito, a fresh, vigorous Leporello and acclaimed French soprano Véronique Gens.

DESCRIPTION: Plácido Domingo, one of the most celebrated talents of our time, is making a major role debut. This is a rare chance to see a genre-defining masterwork, containing some of the greatest choral music ever written, along with some wonderful arias and ensembles. This new production of Nabucco is unmissable. The plot is based on the biblical story of King Nebuchadnezzar (Nabucco), and focuses on his imprisonment of the Hebrews, his struggle against his unscrupulous daughter, Abigaille, his divine punishment and final salvation. Verdi’s rich score offers melody, power and raw drama on a scale that does full justice to the opera’s epic themes of nationhood, faith, love and redemption and calls upon the full might of the Orchestra of the Royal Opera House and Royal Opera Chorus.

DESCRIPTION: This early Puccini masterpiece makes a welcome return to Covent Garden after an absence of over 20 years, in a new production by Jonathan Kent under the baton of Music Director Antonio Pappano. The exciting Latvian soprano Kristine Opolais sings the title role. A consummate Puccini soprano, Opolais caused a sensation as Madama Butterfly in 2011, and with Manon Lescaut, the bold but impressionable heroine, we will see a very different side of her character. She is matched in star power by Jonas Kaufmann as her lover, Des Grieux, and Christopher Maltman as her cynical brother Lescaut. This is a much anticipated new production, and Kent’s vision of a young girl who faces temptation in the big city will surely resonate with today’s audience.

Tickets are available at participating theatre box offices and online at www.screenvision.com/roh. Please note that dates are subject to change.

Over the last Season 7.5 million people have engaged with the work of the Royal Opera House. The commitment to enabling as many people as possible to experience and enjoy world-class opera and ballet will continue as we present our work over new platforms from cinema to online streaming and broadcasts with the BBC and free BP Big Screens. Other access initiatives include the Student Standby Scheme, Welcome Performances for families and the Schools’ Matinees. For more information, visit www.roh.org.uk.

Arts Alliance Media, based in London with offices in Paris, Amsterdam, Barcelona, Oslo, Milan and Berlin, is the worldwide leader in digital cinema, offering a complete range of services, as well as VPF financing solutions for digital conversion.These services include installation, maintenance and support for digital cinema systems; world-class software solutions; management and delivery of content to cinemas; and alternative content and live events. AAM has European Virtual Print Fee (VPF) agreements in place with all six Hollywood studios and has signed over 3,850 VPF screens in multiple territories, including with many leading exhibitors. The company recently activated its Latin American VPF programme with a raft of exhibitor signings in the past weeks.  AAM’s digital cinema software currently touches approximately 15,000 screens worldwide. The London-based Network Operations Centre supports over 5,500 digital screens around the world, and  the company’s digital cinema lab has mastered over 2500 titles to date, and shipped hundreds of thousands of DCPs. AAM’s strategic partnership with Arqiva allows exhibitors to benefit from satellite delivery of content to cinemas. Arts Alliance Media was founded in 2003 by Thomas Høegh. For more information, visit www.artsalliancemedia.com.

Headquartered in New York, N.Y., Screenvision is a national leader in cinema advertising, offering on-screen advertising, in-lobby promotions and integrated marketing programs to national, regional and local advertisers and providing comprehensive cinema advertising representation services to top tier theatrical exhibitors presenting the highest quality moviegoing experience. The Screenvision cinema advertising network is comprised of over 14,300 screens in 2,300+ theater locations across all 50 states and 94% of DMAs nationwide; delivering through more than 150 theatrical circuits, including 6 of the top 10 exhibitor companies.  For more information: http://www.screenvision.com.