The 58th Annual Village Voice Obie Awards, celebrating achievement in the Off-Broadway and off-off Broadway theater, were given out at a ceremony last night at Webster Hall in Greenwich Village. The awards ceremony was co-hosted by Jessica Hecht and Jeremy Shamos. The awards were presented by Bobby Cannavale, Tracee Chimo, Cyndi Lauper, Judith Light, Krysta Rodriguez, Duncan Sheik, Meryl Streep and Courtney B. Vance. 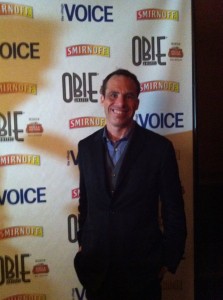 All In The Timing (Primary Stages)

We Are Proud To Present A Presentation… (Soho Rep)

ShowbizChicago.com was at the Obie's to cover all of the great Chicago/NYC theatre connections. For our coverage, please checkout our FACEBOOK page.
***
zp8497586rq